6 things to do in Kassandra Peninsula 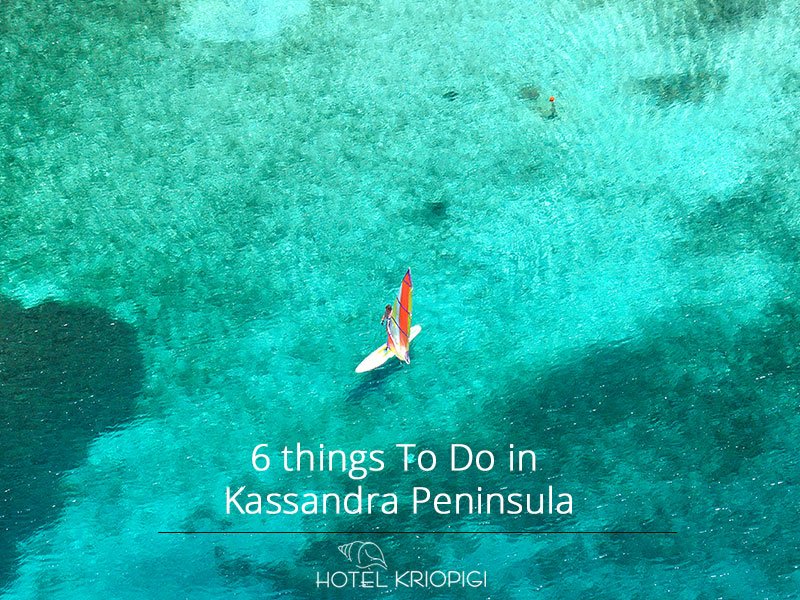 Are you visiting Halkidiki? Don’t miss out on the top places and attractions! For the best vacations, discover here the top 6 things to do in Kassandra Peninsula.

Halkidiki is a real-life paradise for all travellers. It has everything anyone desires for the perfect vacation. Impressive historical landmarks, crystal clear waters, long white sandy beaches, majestic forests, and picturesque traditional villages.

Here you can find out more about the top 6 things to do at Kassandra Peninsula.

The lighthouse of Posidi was built in 1864 and stood close to the water, however as the sea has backed away, it is now relatively further inland. The sand strip in front of the lighthouse was formed after the piling up of the sediments. This colonial-styled lighthouse is still in use and has a small flower garden beside it.

Miti Beach is the impressive beach right in front of Posidi’s lighthouse. It is a long sandy strip that splits the sea into two. However, depending on the tide, the form of the beach changes. The beach is only an empty golden beach, but the view of the brilliant blue sea, the lighthouse, and the green landscape at the back are phenomenal.

Posidi was actually first established by the ancient Greeks in honour of God Poseidon. There used to be a sanctuary in his honour, but today there are only its ruins. Nevertheless, it seems Poseidon, the god of the sea, has blessed Posidi with crystal clear blue waters and extraordinary beaches with unparalleled beauty.

2. Tour of the peninsula by car

Kassandra Peninsula is the westernmost of Halkidiki’s three peninsulas. Amongst the three, Kassandra is the most sophisticated that offers a fusion of history, tradition, nature, top tourist attractions, a calm and quiet lifestyle, and crazy nightlife. To discover everything that Kassandra peninsula has to offer, have a grand tour by car.

Enjoy scenic views of the peninsula, crossing over olive groves, green pine forests, mountainous landscapes, lakes, rivers, and magnificent coastlines. As you drive towards the Kassandra peninsula, you pass by the 1,250-metre Potidea Canal, which joins the Thermaic and Toronean gulfs. As you head south, you can reach fantastic c tourist resorts of beautiful beaches, historical attractions, and fantastic natural reserves.

Toroneos Gulf is in between two of the three peninsulas of Halkidiki, Kassandra, and Sithonia. It has wonderfully crystal clear azure waters and is known for its magnificent scenery of the two peninsulas. Toroneos Cruises have plenty of cruises around Halkidiki. From the Kassandra peninsula, travellers can cruise along the gulf with Pefkohori as the starting point.

The first stop is the isolated beach in Toroni called Aretes. The azure waters of the beach, the golden sand, and the gorgeous view of the ruins of a Byzantine fortress right adjusted to the sandy beach surely will make you fall in love. However, the last stop of the tour before reaching the final destination is the cruise’s peak.

The island Kelyfos is in between the two peninsulas, and its name means shell because it looks like the shell of a turtle. Thus, it is also called the Turtle Island. The island is a graphic tiny paradise with amazing views of the two peninsulas and the Aegean Sea.

Afitos village is truly a paradise for travellers, but mostly for artists. The village has a vantage spot at the north-east part of the Kassandra peninsula. It overlooks the Torneos Gulf. Its great location gives visitors spectacular views of the Aegean Sea and Sithonia peninsula. Additionally, Afitos is a fabulous village full of history and magnificent traditional architecture that can leave anyone awed.

The impressive 19th-century church of Agios Dimitrios takes dominates the village’s main square. The Macedonian restaurants and bars along the cliffs and shore give Afitos a cosy yet beautiful ambiance.

At the Folklore Museum of Afitos, travellers can marvel at ceramics, fabrics, and art exhibitions. In the summer, travellers can enjoy the Afitos Festival of street art and live music.

Agia Paraskevi is a tiny village in the southeast part of the Kassandra peninsula. However, this picturesque village is best known for its thermal springs rather than its beauty.

From the depths of the earth, the healing water gushes out in the small village of Agia Paraskevi. Its unique composition of chemical elements containing rare sanative properties rejuvenates both the mind and body.

A modern spa is suited on a cliff overlooking the Aegean Sea. Its experienced staff welcomes everyone to revitalize them. The SPA of Agia Paraskevi consists of swimming pools, saunas, Hammam, hydromassage, and other treatments and invigoration for individuals or groups.

6. Swim in the Aquamarine Sea

Overall, Greece is mostly known for its fantastic and brilliant blue sea. Here, at Kassandra Peninsula, numerous beaches have acquired the blue flag, meaning they are suitable for swimming. Furthermore, they all are stunningly beautiful.

Additionally, with the combination of the peninsula’s wild beauty of pine forests, green hills, and picturesque villages, the beaches’ scenery is outstanding.

Don’t miss out on the opportunity to swim in the wonderful seas of the Kassandra peninsula and take the chance to have the best vacation photos from everyone.