Ancient Monuments of Kassandra’s celebrated past 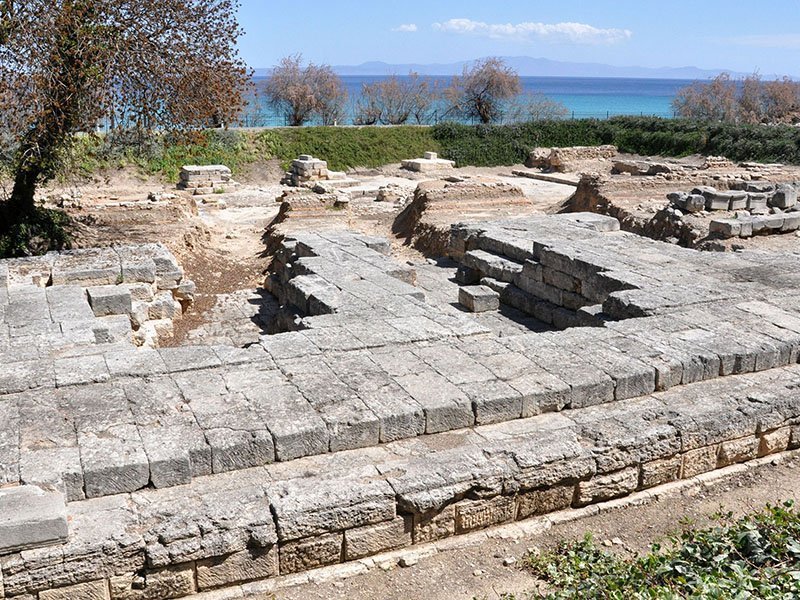 By coming to Kassandra and Halkidiki peninsula, in general, you are privileged to enjoy truly a marvelous countryside, seaside and traditional Greek hospitality.

Ancient sites are a few accompanying conveniences in this heaven on earth because the term “ancient” isn’t solely reserved only for Athens, Peloponnese and Crete.

Sanctuary of Ammon Zeus and Dionysus

Located in Kallithea, on the site where three deities were worshipped, the Euboean settlers have established the cult devoted to Dionysus and, possibly, Nymphs in the 8th century B.C. The cave beneath the rock was their site of worship. In the 5th century B.C., a small sanctuary dedicated to Ammon Zeus (an Egyptian deity that became associated with the Greek god Zeus) was built on the neighboring plateau.

The peristyle temple had 6 x 11 Doric columns, of which only parts of the foundations, euthenteria and crepidoma are preserved. The sanctuary was demolished during the Roman period, but an early Christian bath installation implies worshipping practices up to the Byzantine era.

The Corinthian colonists weren’t idle either, and the excavations conducted around the site of former Potidaia (600 B.C.) have unearthed exquisite examples of pottery, fortifications and tombs. Excavations have confirmed that Potidaia (around present-day Kassandreia) used to be an advanced settlement that played a significant role during the Greco-Persian wars, but also the one that directly caused the Peloponnesian War.

On site, you can get familiarized with building practices of the Greeks and Romans, examine an outline of a former cemetery and observe parts of various buildings of this once prosperous settlement.

Ancient Mendi used to be an Eretrian colonial settlement, whose name is derived from the peppermint (minthi) plant that still grows around. The birthplace of famous Greek sculptor Paiogios (who sculpted the Olympian Niki masterpiece) used to be an Athenian ally, like Potidaia, and its deflection was punished by the Athenians during the Peloponnesian War.

The archaeological site measures 1200 x 600 meters, revealing the Acropolis – a fortified part of an ancient Greek city, parts of structures, streets and tombs. Ancient Mendi was an exporter of renowned Mendaios wine, which was an instrumental of the town’s economic growth. The city was an art center as well, which is confirmed by incised floral and geometric patterns on excavated pots.