Petralona Cave Is a Must-See Attraction 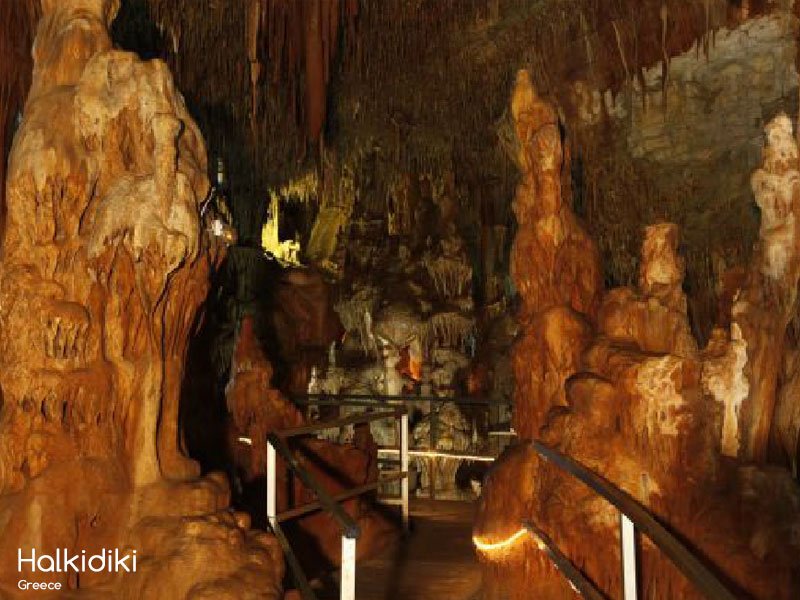 The oldest human skull in Europe was discovered in Petralona Cave, Halkidiki. Check out the interesting story of the 10,400 square meters Red Cave.

Petralona Cave Is a Must-See Attraction in Halkidiki Greece

When a villager of Petralona, Halkidiki, climbed Mount Katsika in search of sources of water, he couldn’t imagine that a geological marvel lied beneath his feet. But he noticed a cleft. He rushed to call two friends and they were lowered down around 13 meters below the ground and into a cave at least 10 meters high and full of corridors, chambers, stalactites, and stalagmites.

This was the year 1959. The news traveled nationwide to the community of geologists and paleoanthropologists. Shortly after, it became worldwide known as the Petralona Cave.

The Petralona Cave is also known as the Cave of the Red Stones due to the colors of the stalactites and stalagmites. It attracted the attention of scientists when the skull of a young woman was discovered. The interesting part here is that it is considered to be 700,000 years old and thus the oldest human remains in Europe. And the fun doesn’t stop here.

The scientists also found fossils of 14 different animals, including lions, hyenas, leopards, deer and bears along with tools made of bones and stone, and traces of fire dating back around one million years.

The Petralona Cave is 50 km from Thessaloniki

The Red Cave is found in Petralona, Halkidiki. That’s a small village. If you intend to spend your summer vacations at Hotel Kriopigi in Kassandra you might want to take the old national road Thessaloniki-Moudania to visit the cave and the nearby Anthropological Museum of Petralona, where most findings are exhibited.

The authentic human skull is kept at the Geology-Paleontology Museum at Aristotle University, Thessaloniki. But you can see a replica in the cave and admire geology at its best. It covers a vast area of 10,400 square meters full of chambers, intriguing rock formations, and pinkish colors that will definitely enchant you.

Please, notice that the Petralona Cave and the Museum will remain closed to the public from 1/1/19 for restoration purposes.