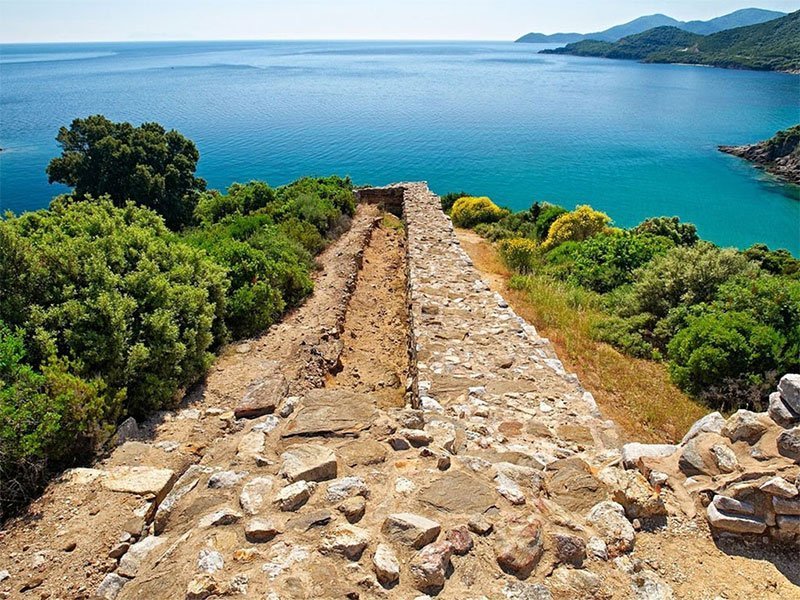 Halkidiki is famous as a region with splendid nature and seaside. But, it is also a significant historic site.

So, if you would like to enrich your vacation with a history tour, you have plenty of options in Halkidiki. Ancient Stagira, around 135 km distant from Hotel Kriopigi, is a site you may wish to visit.

A significant archeological site of Halkidiki

The Ionians founded Ancient Stagira in 655 B.C. It became a prosperous town and the birthplace of Aristotle (384 B.C.), a big philosopher and scientist. During the Olynthian War (349 B.C.), Philip II had Ancient Stagira razed. But, his son Alexander the Great had it rebuilt in honor of Aristotle, his teacher.

What you can see in Ancient Stagira?

You can find Ancient Stagira next to Olympiada, a town named after Olympia, mother of Alexander the Great. The ancient town assumes the top of a cliff, overlooking the Aegean Sea. As you wander around, you will find remains of various buildings and facilities. There isn’t some trodden path you should follow. Just go wherever your feet take you.

You can trace the pattern of the town’s walls, which are parallel to the coastline, in general. At the top of the southern hill, you can find the remains of a citadel. On the northern side, however, take a look at the vestiges of Classical Hellenic houses. Next, don’t miss what remains of the water tank between the hills.

Besides traces of the ancient town, you can examine the remains of the medieval period. The Byzantine fortress’s vestiges belonged to walls, a tower and a cistern.

Since the heat increases already at 10 a.m. in Halkidiki during the summer, you should plan your visit in the early morning or late afternoon. If you stay in Hotel Kriopigi, which is around 2 hours away by car from Ancient Stagira, a visit around 5 p.m. would do.

After all, you can benefit of nearby beaches if you find yourself here at midday. Since you are here, you may also allocate some time to visit the Aristotle Science Park. You can find the theme park inland, near the village of Stratoniki.